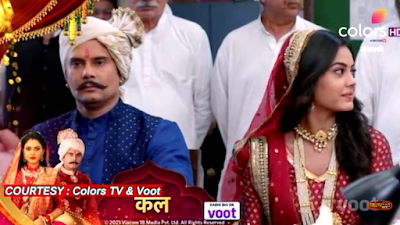 Molkki 17th November 2021 Written Update.
Upcoming episode of Molkki will be very special Upcoming episodes will see a lot of high voltage drama
As we have seen till now that the truth of Sakshi has come in front of Mukhiya ji and Purvi where Sakshi has even tried to kill Purvi.
And also threatened Virendra but here Sakshi has failed in her plan, on the other hand she was watching that the Sarpanch is elected where
Poorvi is chosen as the chieftain and here is the new promo of the show now you will see in the upcoming episodes that
Goes to contest the election of the eastern chief and here the elder chief says that no one is standing here in your competition.
Then here Sakshi comes and she also says that I will stand in the competition of the East, in the election of the chief, here Virendra gets shocked seeing all this and he comes home.
And comes home and tells that now I will not leave Sakshi and tells her men to find out Sakshi where she is living now
Now which interesting twist & turns you will see in the upcoming episodes, we will update you soon, hope you like this information.