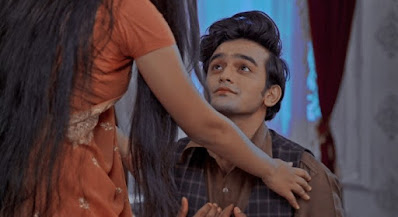 Barrister Babu 31th October 2021 Written Update.
Upcoming Episodes Of Barrister Babu Very Interesting Upcoming Episodes Will Also See Many High Voltage Drama
We already told you that Anirudh is alive and that good news has come. New promo has been launched which shows that Anirudh who is is in injured condition and is with a baba who is treating him and he is alive. is also
But Anirudh has not regained consciousness and he is also unconscious, telling here that whatever teacher Babu had taught to Bondita, he is missing something.
Bondita also feels that something is happening in front of her which she is not seeing and she does not understand anything.
Bondita is standing in front of Durga Mata with folded hands and says that Durga Mata herself can solve this dilemma, let us tell you that
Here Bondita blows the conch, then Anirudh regains consciousness. As soon as he regains consciousness, Bondita speaks and he remembers how they were separated.
Here you will get to see a very emotional moment, Anirudh, who is there, he is in a hut and there a baba is making medicine for him.
Now it has to be seen that Anirudh has regained consciousness, now how will Anirudh and Bondita meet, we will update you soon, hope you like this information.