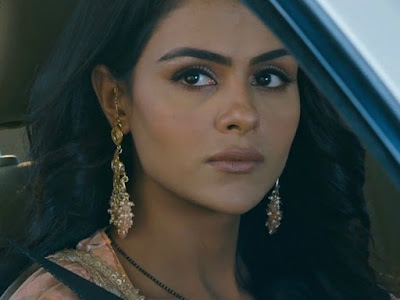 Udaariyan 10th September 2021 Written Update: Buzzo told the truth and Fateh realized his mistake.
In the serial Udriya, you saw how Tejo opened the black box of Jasmine and the address in front of everyone and you have got to see a lot of high voltage drama and you have seen how Tejo drags Jasmine and takes her in front of everyone. And tells her truth to everyone and says how under my nose these two keep meeting and keep making love
No one could believe it, but Tejo says that I wish it was a lie but it is all true, the love of these two was going on for many days, not from today, I was the one who was sitting wrongly thinking that Fateh was noble. The heart is human but it is not like that at all, Fateh is getting slapped hard by Tejo’s father because Fateh has told this thing in front of Tejo’s father that he loves Jasmine and by marrying Tejo, he has made a mistake.
After slapping, Fateh says that I deserve this uncle, now let me go because Jasmine is alone there, whereas when Fateh reaches home, Fateh tells Tejo that you have made a lot of spectacle and I have also heard a lot, now you listen now I will speak
You have also fed a lot of gulls behind my back Buzzo what’s up with you somewhere you meet him at the mall then you meet him somewhere else and tell me lies
Now you will see in the upcoming episodes of Udriya that Tejo will calm down about Buzo’s talk and if she says something then the spectacle will start and again a new story will start in the house.
No one in the house knows about Simran and Buzzo, Buzzo will not sit still because this time the matter has come to Tejo’s respect, Buzzo will now tell everything the truth, Tejo will leave the house and she will leave Jasmine in the house. Will give a place to live, everyone will try to stop Tejo, but it will not happen, she will not stop
And you will see that Fateh will realize his mistake because when Buzzo will tell the truth in front of him, Fateh will understand how wrong he was, now the upcoming episode is going to be very interesting don’t forget to watch the serial Udaariyan.