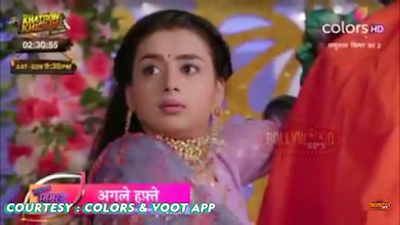 Sasural Simar Ka-2 6 September 2021 Update Promo.
Let us tell you what is going to happen in the upcoming episodes of Sasural Simar Ka 2 serial and what will be the interesting modes you will see in the upcoming episodes.
Friends, in Sasural Simar Ka 2 serial, you will see how there is upheaval in Simar’s life, but at the moment, time is running out that a little good is happening in Simar’s life, you can say that there are some troubles. has decreased
As we have seen in the past that after Aarav’s testimony, Simar’s father Narayan Rao gets rid of the court case i.e. all the tricks of Geetanjali Devi fail.
At the same time, it is seen in Pune that Geetanjali Devi is taking out her anger on Simar in different ways, as we know that she has been furious since that day, now it is also seen in the promo that Ganpati Bappa’s aarti is going on. celebration is on
And the same Ganpati is about to move the veil from Bappa’s face, only then seeing this Simar moves forward and looks at him and covers the face of Ganesh ji well.
Seeing the same, Geetanjali Devi gets furious and she says how dare you touch our Ganpati Babba, from the other side, Simar is also surprised that the mistake was not that big.
The same friends, Aarav gets surprised that Geetanjali Devi is getting so angry on what, let us tell you friends, Gitanjali Devi has given 15 days to Aarav that means Aarav has to leave Simar after 15 days.
But on the other hand you will also see that Geetanjali Devi is melting a little bit for Simar and she is also getting a little bit of space in her heart.