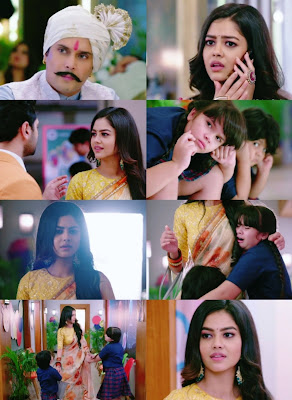 Molkki 2 September 2021 New Promo
Molkki Upcoming Episode Is Going To Be Romantic Interesting And Shocking
But Nani is adamant that he will make Purvi the daughter-in-law of his house, for which she is also seen giving some tips to Daksh on how to make Purvi his own.
In such a situation, one also gives tips that you call Purvi to a Chinese hotel and send some goons and when they leave Purvi then you kill those goons and save Purvi, which will make Purvi very impressed with you.
But the children listen to all these things and the children make a plan to send Papa to that restaurant first, that is, the headman, the headman reaches that restaurant and sees that Purvi is being misbehaved with him. They beat the goons a lot and blood starts coming out of their hands after which they are bandaged.
Due to which a lot of romantic moment is shown between Mukhiya and Purvi and Mukhiya ji i.e. Virender is very happy that he is around Purvi.
In the upcoming episodes of Molkki you will see that Daksh who is there has called Virender to dinner where Virender is coming to the dinner where he deliberately drops something on himself after eating, after which he goes towards the bathroom where his kurta button. Breaks
And then from there the east comes out, then the headman says to the east that I do not know how to tap the button with a needle, do you know how to tap the button coat with a needle
Then Purvi starts buttoning the kurta and she is very close to Mukhiya ji and then there Nani comes and Nani is watching all this, after seeing that she becomes very fond of
Now what else is going to happen in the upcoming episodes, we will update you soon, hope you like this information.