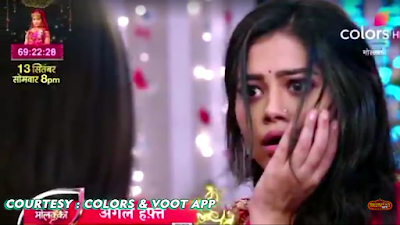 Molkki 12th September 2021 Promo Update.
The upcoming episode of Molkki is going to be very special. Launched a new promo in Molkki as we know that Daksh’s grandmother has to get Daksh married to Dhvani.
Because of this Nani joins hands with Priyashi, I have to make Purvi my daughter-in-law and keep you away from Virendrar’s life, then only see that Nani tells Dhvani to keep Karva Chauth fast
And then Dhvani also agrees, after which we also see the fun of Dhvani and Daksh, Dhvani tells Daksh that why should I fast, you also keep it for me and Virender is listening to all this then we see that the family members are worshiping karva chauth
Same then Priyashi comes and slaps Dhvani and everyone is shocked that what happened and there the promo ends, now how will Purvi react on this slap it will be known in the coming episodes.