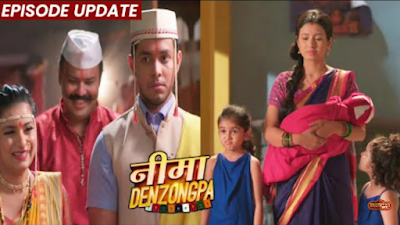 Nima Denzongpa Upcoming Episodes Will Be Very Shocking and Twisted Friends, We Will See In Upcoming Episodes That Nima Has A Daughter And The Nurse Says You Are Lucky That You Have A Daughter
Yesterday there were 11 children in the hospital but out of 11 only you have got a daughter, your daughter will have a big name.
On the other hand, we see that Suresh along with his mother goes to the temple to marry the paintbrush, while Neema is looking for Suresh, but Suresh does not come.
Here Suresh Tulika gets married and there Neema herself comes home with her child, here you will see that Suresh’s procession is coming and Neema is also standing there and she is looking at everything in her eyes. Tears come out but I can’t say anything
Next we will see that the paintbrush talks about her mind to Suresh and will say that I love you very much then Neema congratulates Suresh on the marriage then Suresh says that Neema did you know that we will have a third daughter, so I came. I have to agree and I have to get married
On the other hand, you will see that Tulika and mother do not treat Neema well, now what is going to be special in the upcoming episode, definitely tell by commenting.