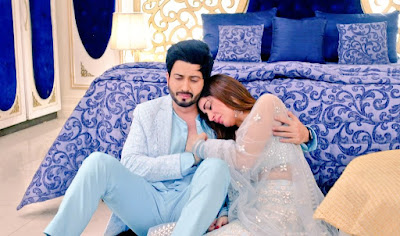 In the upcoming episodes of Kundali Bhagya, you will all see that Preeta and Karan will be seen getting emotional, while on the other hand a big secret will be revealed from Sonakshi’s side. Sonakshi is about to come to know about the truth related to Preeta’s pregnancy, after this you will get to see many twists and turns, what will be the twists and turns, let’s know
In the upcoming episode of Kundali Bhagya, you will see that everyone including Preeta and Karan will be seen celebrating the Haldi function very well, then after that Senakshi will go to their room side to call Karan and Preeta for some work.
Where she saw Karan and Preeta in a movement that that movement would seem romantic but when she listens to Preeta and Karan, she will feel very fond and this thing will be related to Preeta’s pregnancy, will see that Karan and Preeta are together. will hug each other
On the other hand, the story is now going to take a new turn. Talking about the reports, Sherlyn will try to get the report but now such a track is going to come after a while.
After a while you will get to see a very strong twist attached to Sherlyn, once again revealing Preeta will be almost almost successful, but it will take a lot of time, now you will get to see some romantic moments of Karan and Preeta and Sonakshi’s wedding will see a lot of twist and turns..