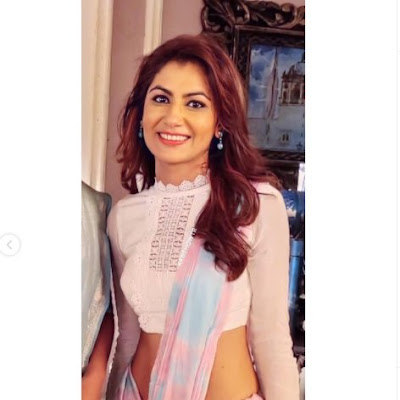 Riya will take revenge on Prachi when Prachi goes to help Riya then Riya will throw her out of her room and on the other side you will see that both Pragya and Abhi have become one.
In the upcoming episode of Kumkum Bhagya, on the request of Prachi at Ranveer’s house, Ranveer’s mother will get Prachi and Riya to worship her in the house and will give a sari to her mother’s worship and come wearing a sari. But in this too Riya will take Prachi’s trick.
Riya will take a sari from Ranveer’s mother’s hands and angrily go to her room and will make up her mind in anger and says that Prachi knows that I will look dirty in a sari so she is playing the trick that everyone comes wearing a sari and Prachi will further say that now you see I will wear this saree and will look more beautiful than you, second and you will see that Prachi will think about Riya and will say that Riya does not know how to wear saree and how can she wear saree alone for this. go help him
And that’s why when Prachi will go to Riya’s room to make Riya wear a sari, Riya will be shaken to see Prachi coming to her room and she will start getting very angry on Prachi and will say that you have come again, you have come to me 2 years ago. I will take revenge for what I did with you and now I will never lose you and will keep the key of this house, which will make Prachi very angry after hearing it and she will say that I had come here to dress you in a sari, hearing which Riya will say very angry That I don’t want your help, you go away from here and because of this, tears will come in Prachi’s eyes and she will go out of her room
But on the other side I will see Abhi and Pragya will become one and this will happen when Pragya’s business partner is killing Gaurav Dhawan now, then Pragya will say why are you killing him then now he will say that he was leaving you so I I got angry even though there is no relation between us, but we have feelings between us.
Hearing this, Pragya will start feeling a little in the middle of now and she will also hold Abhi’s hand because a lot of blood will be coming out of Abhi’s hand and she will tie her handkerchief in Abhi’s hand. Whether it will happen or not or whether it should be one or not, definitely tell by commenting..